Baby & Lil Wayne: Sometimes a Kiss is just a Kiss!

Baby & Lil Wayne: Sometimes a Kiss is just a Kiss!

I remember, as a father, kissing my son on the lips from birth up until the age of about four and then, one day as I went in for the lip-lock, he stopped me cold. "No daddy! Boys don't kiss on the mouth!" It happened just like that in one day! I don't know where he got the idea. Cultural conditioning. I obliged him and we never went there again, but I continued to kiss my older daughter on the lips until she was about thirteen-until she realized it was more fun to kiss boys!

Many of you young hip-hop homophobes are trippin' because rappers Weezy F. Baby a.k.a. Lil Wayne and the Birdman a.k.a. Baby like to kiss each other on the mouth. So they're gay huh? That's what most of the Internet gangsta-bloggers say. "That's fuckin' homo! A nigga kissin' anotha nigga on the lips! Ugh!"

Lil Wayne and Baby are actually making a bold statement about manhood and what it means to have brotherly/fatherly-son love.

Hetero hip-hop heads are actually repulsed by their "father-son" show of affection! Well I'm not! Big-ups to them for not continuing the male-posturing stance of "high-fives" and "pounds" when greeting and showing love to one another. In many cultures it is totally acceptable for males to kiss one another on the lips. Some of our fathers still kiss us on the lips and we don't think any faggotry is involved. So why we gotta take it there with these two rappers? Cultural Conditioning! We don't know the full extent of their relationship! What we do know is that Baby is a "father-figure" to Lil Wayne. What we do know is that both of these rappers have children-by women-through the act of sexual intercourse. What we also know (but many of us won't admit) is that we grown-ass men desire to have a father in our lives! Can't we just accept that Lil Wayne has found his father and that their bond is so strong that they don't mind kissing one another on the lips-and phuck what the world thinks? 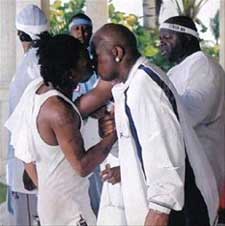 A few years ago-after all of the South hatin', Lil Wayne hatin' and fag-bashing, a group of MTV aficionados made Lil Wayne their number one pick as the rapper with the most swagger-over Fiddy, TI, Jay-Z, Kanye West, etc. -a man who kissed another man on the mouth! And Wayne is still the hottest rapper out! (Go cop that Tha Carter IV when it drops!) That homo-bashing shyt is played!

Our society is phucked up! Every man has kissed a male on the mouth! It may have been your dad, your uncle, your mama's boyfriend, your son, your male cousin, your older brother or whomever-but a male has kissed you on the mouth! And if you think men kissing men on the mouth is gay, I dare you tell that to some of these Italian Mafiosos! Those are some real gangsters! Remy Ma and a few other rappers have rapped, "Gangstas don't dance!" as though they are real gangstas! Shut the phuck up with that bullshyt! Naw! The "real" gangsters (Italian/Russian Mafias, Asian Triads) don't make music! These gangsters kill! Have they not seen The Godfather, parts I, II, III and Scarface? How about them M-I-A Yayo Cocaine Cowboys? Gangsters do dance! Do they not remember in The Godfather how Marlon Brando danced with his wife and daughter at his daughter's wedding and later on with his grandson? Do they not remember the scene where Tony Montana/Al Pacino dances with his boss's wife in Scarface? How does dancing make you less gangsta? How does a sacred kiss of loyalty and love between two men make them less manly or homosexual? I'm just sayin'…

It would mean something entirely different if these rappers were inserting a tongue in each other's mouths! Then you could make a case that they were gay. But as the argument stands, you could make a case that a man who kisses his mother on the lips is doing an incestuous thing. Or an adult who kisses a child on the lips is a pedophile. Or a pet owner who kisses his dog on the mouth is into bestiality! Now isn't that nonsense? Of course it is! This is what we have done with Lil Wayne and Baby-made a "mountain out of a molehill!" They're laughing at the shock-value of it all.

The gay/faggot label is an old one, dating back some 2,000 years. Even Jesus has been "stigmatized" in religious history as possibly homosexual! (Do some fast-food research and Google "Secret Gospel of Mark," "Beloved Disciple," "Carpocratians," "Professor Morton Smith," "Clement of Alexander Regarding Secret Mark," and "Disciple Whom Jesus Loved"). In this regard, Wayne, Baby (and I) are in the good company of the Savior of the World! "Blessed are you when men cast your name out as evil!" Men, in particular, have long called the messengers (whether they be religious, social reformers or rapping wordsmiths) gay in an effort to diminish their calling. But real-recognize-real and that's why Lil Wayne and Baby haven't had their ghetto passes revoked! They aren't pariahs (outcasts) in the hip-hop world!

Is it the norm for men to kiss men in our society? No! But that's how they roll!

Things aren't always as they appear! The problem is that our minds have been conditioned/brainwashed to accept and reject certain ideas of manhood and heterosexuality and anything that is outside of our perception and paradigm of masculinity is deemed homo. In reality, all heterosexual men are "homo"! "Homo" simply means "man" and "same." Indeed, Baby and Lil Wayne are homos-"men" of the "same" mindset. I'm a homo! Every Internet blogger who says, "No homo!" is a homo!-and an ignorant homo at that! You might not suck a dick, but everything else about you is homo! Your mannerisms-HOMO! (same) Your dress-HOMO! (same) Prince and Michael Jackson are the most HETERO men we've ever seen! Why? Because their mannerisms and dress are nothing like our so-called heterosexualism!

"Hetero" means "different" and "opposite." They definitely dress "different" and "opposite" of most men. You ever seen Prince rockin' an oversized white T-shirt, an iced-out Jesus piece, some Red Monkey jeans, a fitted baseball cap and some Uptowns (Nikes)? Hell No! You ever seen Michael Jackson dressed in a three-quarter length business suit (minus the epaulettes and medals of nothing) and a Godfather brim with gators to match? It ain't gonna happen! The only tennis shoes we've ever seen Michael Jackson in were some very feminine-looking black buckles & rhinestone L.A. Gears! (Circa.1990). And he wasn't even playing basketball! He was dancing on a darkened street, doing the Running Man and ghetto pirouettes! Those shoes were so unmanly. If a dude stepped on the court with them shyts on, he'd be the last picked and talked about from here to eternity! But don't front! Some of us rocked them! Some of our mamas put them on their children-who grew up to be gangsta rappers and Internet bloggers! (lol!) This is our heterocentric culture. Lil Wayne and Birdman ain't gay! They just have some eccentric ideas about manhood. Sometimes a kiss is just a kiss!

"…whosoever shall say to his brot
her, 'Raca' (Faggot) shall be in danger of the council. "
-Jesus Christ on Homosexuality (Matthew 5:22)