To Snitch or not to Snitch? That is the Question!

To Snitch or Not to Snitch? That is the Question!

I am proud of the work I did for the Bureau (da FBI) 30+ years ago! I helped put a mass murderer and pedophile in prison for 20 years! Everything you need to know about my “shituation” is a matter of public record. The whole court case is public record... and then there is a book written by a Pulitzer Prize winning author on Khalil Amani... and then, six national TV shows and a feature in People Magazine on Khalil Amani. I am the most documented public figure in the black YouTube sector! There is no need to take my word or the words of people unfamiliar with the Yahweh case (like Hassan "Poppy" Campbell).  Indeed, I became a government informant (what the uneducated in criminality call a “snitch.”) It is an easy assumption to say that I engaged in criminality while in the Yahweh cult and then found myself in trouble and snitched on my organization. This is what the uniformed assume, but the truth of the matter is that I freely walked into the Miami FBI office and freely told what I had been a part of. I was never arrested. I was never indicted. I did not “cut a deal” for my testimony—and most of all? I never participated in any criminality surrounding the Yahweh cult. Anyone who says differently has not read the court case and is simply bloviating (blowing smoke up your ass). I was motivated to become a government informant based on two factors. #1. Rescuing my children from the cult and more specifically, getting my daughter out of the cult because the leader was a known pedophile. I will never apologize for rescuing my children!—and #2. Putting an end to the murders and beheadings and random ear removals of the citizens of Miami. That's what was going in Miami circa 1980-1988! And so, for my righteous work, comes the “snitch” label, which I wear as a badge of honor, because my morals and ethics are not defined by ignorant street codes! This is where I differ from my detractors—those in the streets, those YouTube imps and those that claim to love God, yet are beholden to street codes over morality codes.

If there be something called a “Street Code” then, in a civilized society, there has to be a “Civilian Code.” The “No Snitching” code is a carryover from the Mafia and all of the criminality of those Italian gentlemen. But even as murderous as they were/are, they still distinguish between “civilians” (law-abiding citizens, who were not looked at as “snitches” for reporting crimes to the police) and other crime families (who were fully engaged in criminality). The lines are clearly defined for the Mafioso. Even when killing a rival, the family of the rival is off-limits! A Mafioso’s family is spared the wrath of an enemy. Why? Because, in many cases, the Mafia “Goodfella” who kills another Mafia “Goodfella” has a family. No Mafioso wants to see his folly taken out on his family! No Mafioso wants to come home and find his familia murdered because he murdered someone else’s familia! La Cosa Nostra (Our thing!) has rules and regulations and codes of conduct! There are “Rules of Engagement” to doing criminality and Mafiosos have a strict hands-off policy when it comes to fucking with civilians (the families of Mafiosos). 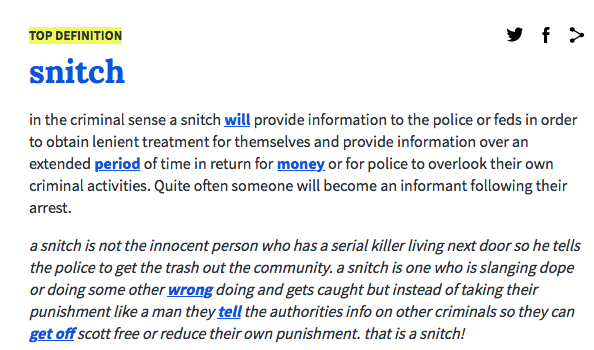 This is what YouTubers like King Earner should be promoting and educating people about. The difference between civilians reporting crime and criminals snitching. This is what YouTubers like Queenzflip's many guests and former criminals--Killa Kev, Cory King, Wildkat, Mel Kross, etc. should be promoting; that it's okay for the law-abiding citizen to cooperate with the police to rid the neighborhood of the vermin that destroys the black community! Where is the emphasis on promoting the rights of citizens to tell when they see wrongdoing?

Oh, but these Crips and Bloods and Zulu Nation types and street dudes—these guys have stolen/hijacked borrowed the “No Snitching” policy of the Italian Mafia and bastardized it! There is no honor amongst these thieves! Instead of targeting a specific person for extermination—in their cowardice—they drive through a neighborhood and shoot everything walking—babies, little girls & boys, mamas & grand mamas sitting on the front porch—and with a straight face say they are gangsters, but too afraid to get bloodstained hands by one-on-one, Mano-A-Mano combat with the “enemy”—afraid to leave the cozy confines of a car and walk up on a man and throw up his dukes and shoot the fair one!

I’ve seen all three Godfather movies and I ain’t neva seen a Mafioso do a drive-by that killed anybody but their intended victim(s)! (with the exception of the bombing of Michael Corleone's car in Sicily, which killed his wife.) You Negroes have stolen their street-code of “No Snitching,” but fail to see the nationalistic sentimentality (love for their own people!) of the Italian Mafia towards the Italian people. Mafiosos love their people—you fuckin’ black moolies! Gang members don’t! Gang members say, “Fuck who’s around when we come through! Errybody gettin’ wet (bloodied up) when we ride through!” That’s the mark of a chicken-shit wannabe gangster who kills indiscriminately.

It is no wonder why gang members and other criminals want to institute a “No Snitching” policy across the board! They are cowards and want immunity from the whole community, not just the criminal community.

Snitching is not a civilian reporting a crime! Snitching is when a criminal tells on another criminal! Period point blank! If two dudes are breaking the law and one gets caught—he’s supposed to take the rap and not “snitch” on his partner. If enemies are warring and one enemy kills his enemy—all that are involved should tow-the-line—keep their muthafuckin’ mouths shut and let street justice handle the situation. If he tells? That’s snitching! Don’t allow these fake mofo gangsters and YouTube personalities who hate Khalil Amani and want to paint me as a snitch, by bastardizing the role of a civilian who’s trying to protect his family and community from the lawlessness of a religious cult! Khalil Amani did the work of bringing down a murderous and pedophilic cult! Up until now, Hassan "Poppy" Campbell has allowed the pedophilia of Afrika Bambaataa and the Zulu Nation to persist, because he is bound by the code of the streets not to "snitch." Honoring the street code takes precedence over doing the ultimate right thing; getting the authorities involved. It is only recently and because of a bruised ego that Hassan has finally rejected the street code of no snitching and claims that he will seek civil jurisprudence to deal with his former molester, Afrika Bambaataa.

Street guys say, “Fuck the police!” But without police, a civilized society will become a Third World Whorehouse—a society where rape and murder and child molestation will rule the day and the weak (those without a gang) will be subjected to the strong (those who are part of a gang like the Zulu Nation who have power in numbers). Just check those countries that are without the “Rule of Law.”

For every “Rodney King” or “Amadou Diallo” or "Michael Brown" or "eric Garner" there are ten black-on-black beatings/murders happening everyday! Where’s the outrage? The black outrage against police brutality is empty rhetoric when we stand mute to self-genocide. Many of us have the attitude that a black person can kill another black person, but a white person or a policeman better not! How silly!